This week at a Bible study, my pastor lead us through an interesting discussion beginning with the question, “If life were like the Super Bowl, what would our role be?”  I liked his analogy so much, I decided to share it.  Credit for this analogy goes to my pastor; any misrepresentations in my embellishments are my own! 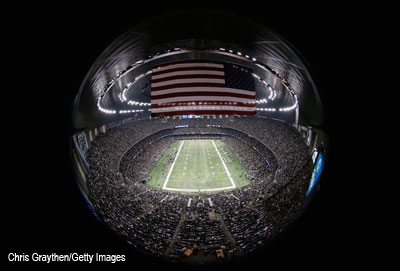 We would not be the spectators.  It is not our role to simply sit back and watch.  We are not called to idleness, but to action.  We hear that some among you are idle and disruptive. They are not busy; they are busybodies.  Such people we command and urge in the Lord Jesus Christ to settle down and earn the food they eat. And as for you, brothers and sisters, never tire of doing what is good (2 Thessalonians 3:11-13).

We would not be the referees.  We do not make the rules, nor do we enforce them.  It is not our place to judge the thoughts and actions of others.  There is only one Lawgiver and Judge, the one who is able to save and destroy. But you—who are you to judge your neighbor? (James 4:12)

We would not be the coaches on the sidelines.  We do not get to call the plays. A person’s steps are directed by the Lord (Proverbs 20:24a).

We would not be up in the press box.  We are not a neutral observer, hovering over the game.  It is not our job to analyze the stats and interpret the plays of the game for others.  No prophecy of Scripture came about by the prophet’s own interpretation of things. For prophecy never had its origin in the human will, but prophets, though human, spoke from God as they were carried along by the Holy Spirit (2 Peter 1:20-21).

So what would our role be?

We would be the players, out on the field, getting muddy.  Each one of us would have a specialized job to do for the benefit of the whole team.  For just as each of us has one body with many members, and these members do not all have the same function, so in Christ we, though many, form one body, and each member belongs to all the others. We have different gifts, according to the grace given to each of us (Romans 12:4-6a).

This does not mean we can’t do things outside our primary skill.  Only a fool would say, “Well, I could have intercepted that pass, but that’s not really my primary job so I left if for someone else to do.”  No.  There are times when we are called to do the work that is at hand, regardless of our comfort or skill. Whatever your hand finds to do, do it with your might (Ecclesiastes 9:10a).

If we were players in the Super Bowl of life, there would be both challenges and victories.  Sometimes we would perform a spectacular block that saves someone else from harm.  Sometimes we would catch the touchdown pass.  Sometimes we would take a blow to the head and be carried off the field.  But no matter what was happening around us or to us, we would play with a foreknowledge that no one in the Super Bowl has:  We know who wins the game.  The seventh angel sounded his trumpet, and there were loud voices in heaven, which said: “The kingdom of the world has become the kingdom of our Lord and of his Messiah, and he will reign for ever and ever” (Revelation 11:15).

We have to play hard until the clock runs out.  That is our job.  But we can also play with the knowledge that when the final whistle blows, we are not left muddy on the field.  We are invited to the victory party of our Lord.  And if you thought the Super Bowl party was fun, you haven’t seen anything yet. 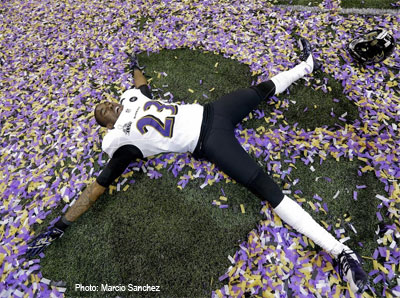 Thanks be to God! He gives us the victory through our Lord Jesus Christ (1 Corinthians 15:57).