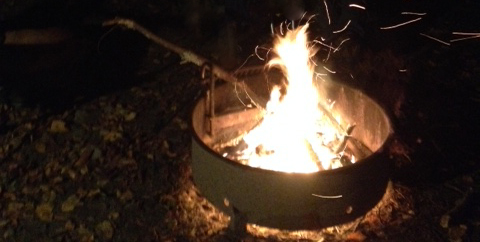 Happy Father’s Day! This post originally appeared at http://www.inspireafire.com/still-small-voice/. I’m re-posting it here in honor of my dad!

“Let your conscience be your guide,” my father used to say.

Let your conscience by your guide.

I don’t remember him ever telling me what my conscience was, but somehow I knew. It was that still, small voice that stopped me when I was tempted to go along with the wrong crowd. It was that slight, uncomfortable prodding when I was tempted to take the easy way out. It was the seed of something beautiful that would grow with me and become at times the clear, almost audible voice of God.

Sometimes that voice needs to work through a lot of tangle before I can hear it. I am reminded of this when I read the story of Elijah in the cave (1 Kings 19). There was a great and powerful wind, followed by an earthquake, followed by fire, but the Lord was not in any of those things. Instead, these cataclysmic events were contrasted with the gentle whisper of the Lord.

We read this story in a few lines and it seems like Elijah waited only moments before he could walk to the opening of the cave and talk with the Lord. When my life is in cataclysmic upheaval I wish that I, too, could wait for just a moment and then walk out of the devastation and into gentle instruction. I yearn for God to say to me: “You are not the only one left. Come out of there. Let me tell you what to do.”

But we don’t know how long the winds blew as they tore apart everything that once seemed secure. Or how long the earthquake rooted everything into upheaval. Or how long the fire burned to rubble even what little remained. What we know is that even after all of that, the still small voice was still there for Elijah.

And that still small voice is still there for us.

He is guiding our steps.

I recently asked my father what lessons he hopes he passed on to his children.

“Integrity,” he answered. And in that one word he summed up a multitude.

I have more than one Father teaching me that lesson.

Fifty days after Passover, Jews from all nations gather in Jerusalem to celebrate Shavuot, the Feast of Weeks, also known as Pentecost. On one very special Pentecost a little over 2000 years ago, the gathering Jews witnessed a never-before-seen event. With a sound like rushing wind and a visual of leaping flames, the Holy Spirit descended upon the apostles. They began proclaiming the wonders of God in different languages. Some of the gathering Jews were amazed – “How is it that each of us hears them speaking in his own native language?” – while others laughed at them, thinking they were drunk.

How is it that such an outpouring of power could be witnessed by some as a great miracle and by others as drunken nonsense? The answer, I think, is that they heard different things.

God’s spirit has been poured out on all people, but not all people recognize the voice. Jesus gave the analogy of sheep that follow their shepherd when they know his voice. To the unbelieving Jews He said, “You do not believe, because you are not my sheep. My sheep listen to my voice; I know them, and they follow me” (John 10:26-27).

Likewise, on the day of Pentecost, God sent His Holy Spirit to speak through the apostles. From the gathering crowd there were those who recognized the voice. They heard, each in his own language, the wonders of God being proclaimed. Astonished, they looked around, and in the neighboring faces they saw similar amazement. This divine encounter was not happening to them alone, but to everyone who connected with the words being spoken.

But there were others in the gathering crowd who did not share this amazement. Perhaps they did not press in close enough to truly hear. Perhaps they had hardened their hearts to not recognize God in their midst. Whatever the reason, it is not hard to imagine what they heard: the sound of eleven men shouting in multiple languages could easily be confused with drunken gibberish. They turned away from the presence of God and scoffed at the apostles, saying, “They are filled with new wine.”

The outpouring of God’s spirit at Pentecost was an inaugural event, but the outpouring of God’s spirit has never ceased. When the crowd asked Peter what they should do, he replied, “Repent and be baptized, every one of you, in the name of Jesus Christ for the forgiveness of your sins. And you will receive the gift of the Holy Spirit. The promise is for you and your children and for all who are far off – for all whom the Lord our God will call.”

Did you catch that? The gift of the Holy Spirit was for them, and their children, and for all who are far off, including everyone whom the Lord our God will call. In other words, this promise is for us, too.

Whether the entire Christian faith is foreign to you, or you are a believer who struggles with confusing elements, don’t be too hasty to mock. If it sounds like gibberish to you, press in closer. Listen more intently. Read God’s written word, and listen to biblical teachings. You may be surprised to discover that through the tumult around you, God is speaking directly to you.

He is waiting to pour His Holy Spirit into every area of your life.